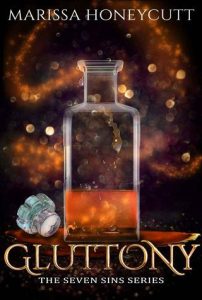 Can the most damaged of sins embrace redemption?

By night, fallen angel Triel Ekron is a successful nightclub and restaurant owner in Las Vegas. By day, he enjoys assassinating humans in the most creative of ways.
When his latest mark turns out to be highly gifted in the kitchen, Triel gives her a choice: become his new imprisoned chef, or watch her family be murdered in front of her before she’s killed too. After all, his last chef just met an untimely death—at his hand—and Triel is looking for some new flavors to indulge in.

Cassie Fleming has dreamed her whole life of owning her own restaurant, following in her beloved mother’s footsteps. But when her mother’s murderer finds her in Witness Protection, she’s left with an ultimatum—and saving what’s left of her family is the only option. She’ll do anything for them, including signing away her freedom.

Triel’s brutal demonic side will wage war against Cassie’s kind and forgiving nature, but it’ll take a lot more than the cruelness of a fallen angel to kill her spirit. And no matter how much Triel tries to avoid it, Cassie gets under his skin in a way that makes him question everything he’s believed for so long. Will he put aside his prejudices and admit he’s been wrong about humans all along, or will he destroy the precious gift his father has offered him?

WARNING
There are no heroes in this dark PNR series, only villains. It consists of explicit content, dubious, and graphic situations that some readers might find offensive.