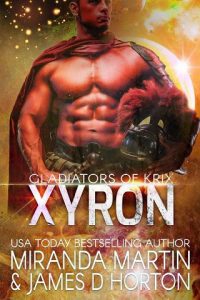 The story of the human survivors grows bigger with the Gladiators of Krix!
First seen in Dragon’s Capture, Red Planet Dragons of Tajss Book Six – return to Krix with a new group of human survivors.

Krix is a gladiatorial planet and our human survivors have been captured and sold into slavery. It’s up the the alien Gladiators to save their mates from the harshest environment possible. Co-written by USA Today Bestselling Author Miranda Martin and her own soul mate James D Horton, escape to Krix and read the complete series now!

Xyron – Sold into slavery on an alien planet, there’s only one person who wants to help Cora escape. But that’s not his decision to make.
Xyron wants to show her the pleasures of being his mate, but they are slaves, and their lives on not their own…

Anzil – He’s the Primus, the best of the best. She’s a Space Marine with a mission to free her people.
He knows that his female wants freedom he’ll take on the entire planet to make sure Kiara is liberated. He’ll do anything for what’s his. And she is.
Spthifius – I live my life by two rules. One: Take what you want or have it taken from you. Two: Don’t let anyone close. You let them in, then they can hurt you.
They’ve kept me alive for years. But then Savannah arrived.

The Twins – One night of fun wasn’t supposed to end up with Kennedy pregnant…
Born as two instead of one, we share a mind– our thoughts and feelings always known to each other. This bond is the same as shared among mates of the soul, Pari our people call it.
We’ve always assumed this meant we would never form this bond with others. Never know this connection with a female. Until Kennedy. There was something there the single night she chose to come to us.
A night that left us wanting more, no matter the cost or danger to our lives being slaves brings.

Crau – I was a slave. I was a gladiator, but I broke free and now I am a leader in the Free Movement. This dangerous and complicated life leaves me little time for a woman, much less love.
But the moment I see Camilla my mechanical heart stops.
The entire planet of Krix and its loathsome system of slavery stands between me and her. And I don’t give a damn. The female who reminds me that I more than just a machine is mine, and if I have to destroy the whole planet to have her, then so be it.