Home
contemporary romance
Give Me Permission by Monica Walters (ePUB) 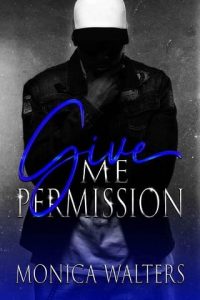 The love she sucked from my chest blindsided me. I can’t function without her, and nothing is going to stop me from trying to be with her… not even her.

Seneca Roberts is a man to approach with caution. He’s from the streets, and that’s the only way he knows to be until he is forced to be different. No other woman can control him like Kaysyn Anderson, and he is smitten from their first encounter. The moment she steps into his life emotionally, something inside of him changes. He no longer craves various women. He only wants one… her.
Life has taken a toll on Kaysyn Anderson. She’s experienced the upheaval and is doing her best to recover from the trauma. Her heart is in turmoil, and she doesn’t know which way to turn. At one moment it’s pulling her one way, and the next it’s pulling her the other. Both directions seem to be toxic to her well-being, but there is one that she can’t seem to resist. Seneca Roberts. He’s who her body craves and who her heart wants.
Seneca’s lifestyle is a determining factor in his relationship status, and he refuses to change who he is until he realizes what he could miss out on. Kaysyn is battling the risk of pursuing something more with him because of what and who she perceives him to be. Can they come to a common ground to get what they both long for, or will any effort toward a relationship be a waste of time?