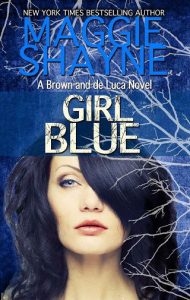 So, I’m going along in my blissful life, waiting for my guy to get off his ass and pop the question and trying to put my next self-help book to bed, when I’m interrupted by a mental intruder. I’m suddenly doing a ride-along inside some stranger’s head, while the attached set of hands strangle a guy in the back seat of a car.

It felt like I was killing the guy. But I didn’t, because I woke up cussing (not unusual) in my own bed beside my sexy cop and my blind bulldog. Said sexy cop then gets a text about a body, and I know it’s the man I just sort of murdered.
Turns out mister picture-wire necktie isn’t the only victim. One of the others was punched in the face by our 19 year-old sort of kid in front of 20 witnesses right before he vanished. Jeremy is brought in for questioning by Mason’s own co-cops.

The only other suspects are a woman who beams sweetness and light like a freakin’ earthbound angel, and an old horror star who’s supposed to be dead. And if those two are murderers, I’m Miz Manners.
Mason wants them to be guilty because it would clear Jeremy. He thinks I’m keeping things from him, which I am. He thinks I’m not putting Jeremy first, which I totally am. This whole thing is getting between us. So I’ve gotta solve it, fast.
Even if it means going face-to-face with a serial killer.