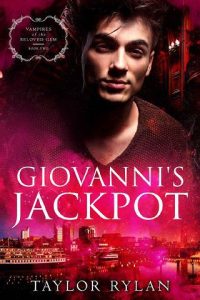 Can vampires from two separate worlds figure out how to mesh their lives together?

Giovanni Cardello loves life. He is more than content in his position as a craps dealer aboard the Beloved Gem, and his special bond with the coven master and close friends is all he needs. But mistaken identity leads to him being kidnapped, and he wonders if he’ll ever see his coven family again.

Lucius Mancini is honored to be the second for the created vampire. His family line goes back to the original eight, and Lucius is proud of the life he’s lived. When the created ones are called to be part of the newly formed paranormal council, the last thing Lucius expected was to scent his beloved. But when he discovers his beloved is missing, he questions if they’ll find him alive.

When Giovanni wakes up back on the Gem, he didn’t expect the gorgeous vampire in the room to be his fated mate. Gio agrees to move to Montana with Lucius, but the council is still forming, and Giovanni doesn’t know how he fits into this world. Now an unknown presence appears near Gio on the mountain, leaving everyone to wonder what its intent is. Is it after Gio? Or does it not want the council on the mountain?

Giovanni’s Jackpot is the second book in the Vampires of the Beloved Gem series. Each book in the series focuses on a different couple, but these books should be read in order as there is an ongoing backstory, and previous couples will make appearances in future books. This is a fated mate MPREG story with plenty of sexy times. You should expect all the normal vampire shenanigans and sometimes love bites in unexpected places.