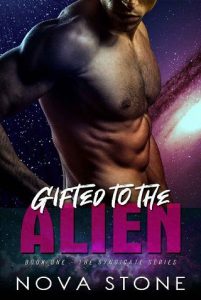 First, he claimed my body. Then he claimed my soul.
When I was gifted to a powerful alien crime lord, I was warned to never defy him.
But I didn’t listen.
The disobedience earns me my first taste of Ilex’s brutal discipline, and it’s every bit as hard as I feared. He spanks me, strips me, and claims while his soldiers watch, forcing me to climax again and again. Now I’m a pawn in the Syndicate’s criminal empire, a queen within the Verum mafia family, and Ilex’s captive.
He wants to break me, but his new queen is about to bring her king to his knees.