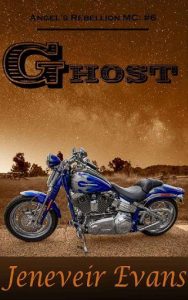 My name is Trad Knight. I go by Ghost, a handle I had gotten in the Army because of my ability to slip into places so quietly, so stealthily, making it hard for anyone to know I was even around. Like my best friend, Casper, I had planned to make the military my career, but one mission changed that. All my long range plans dissipated into thin air as if they never existed.

When I joined the Army, I had even given up my girl, Dani. I didn’t feel like it was fair to make her wait on a man who was never going to be there. I didn’t need the weight of a wife and family weighing me down.
That sounds selfish, I know. Delta had always been my dream. With that dream came the very real possibility that I could bite the bullet at any time. I just didn’t feel like it was fair to ask a woman to wait on a man who might not come home. And kids? Hell, I felt that would be the ultimate act of selfishness. Maybe my thinking was skewed, damn I’m sure it was.

I do know one thing, it didn’t take me long to regret leaving Dani behind.
My buddy Cas and I traveled the States on the back of our bikes for six months after leaving the Army, fighting our demons and hunting for a place to call home. We missed the brotherhood of our Delta team. A call from our former team leader, Shadow, led us to the state of Arkansas and the Angel’s Rebellion MC.
There we finally found what we were searching for, brotherhood and a home. While I had the backing of men I knew I could trust to be there for me for anything, I was struggling with my PTSD. I was also regretting pushing Dani away. But it was too late for us now, she had moved on, married, had kids. And I, well, I was one lonely son of a gun. A man who was eaten up with regret. I deserved it, damn did I deserve it. I was afraid that I’d never find the love of a good woman like I once had. I wouldn’t ever find another Dani.