Home
Paranormal / Sci-Fi
Genesis: The Soldier and the Hybrid by Serena Simpson (ePUB) 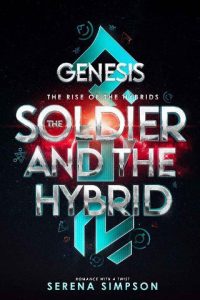 Genesis: The Soldier and the Hybrid (The Rise of the Hybrids #2) by Serena Simpson – Free eBooks Download

Liar, traitor, those were the words that hung over Lieutenant Eden Brown’s head. Now all she had to do was make sense of what was happening to her. Somehow, she woke up in the Hybrid City. The military wanted her court-martialed. The Hybrids wanted her loyalty, or they would turn her over to the government. She wanted…and therein laid the problem. Time was running out and what she really wanted to know was why Jaziel made her heart beat faster. Did she believe in the Hybrid cause, or did she simply want one of them as her own?

Jaziel was given the duty of guarding the prisoner. It was not one he wanted, but the lives of his people were at stake. Watching her would have been easier if she didn’t remind him of sunshine. She was one strange quirk after another, soft yet harder than steel. His lips wanted to tilt up when he was around her. Was she a hero or a traitor to the American people? Had she come to kill the Hybrids? Could she be trusted? He needed an answer before he went and did something foolish like falling for the enemy.

Time was running out, and a target was placed on Eden and Jaziel’s heads. They were wanted dead or alive. There was no time left, and they had to decide if the first bloom of romance and the possibility of a relationship was enough to establish trust. If not, someone would die. Was love worth placing your life on the line for?

Tags’ I’m about to die sex is a thing, right? You and me against the world. Who bioengineers a freakin’ virus? Did they just try to control my mind? Alien trackers. Oh hell, are those real aliens? Stop can I get off this ride? You want me to kill that with this? The people who were supposed to be my ride and die betrayed me. Opposites attract. Overcoming your neurosis.