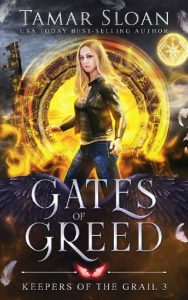 Another Gate. Another Sin. And time is running out.

Reign and Arielle know the next Innocent must be found, despite the overwhelming odds. Darkness is rising, threatening the world as they know it.
There’s a new enemy—a demon manipulating humans’ most basic desires. A mysterious organization with alliances as old as time. And evil is weaving its dark magic among their ranks. Magic powerful enough to rival the Grail itself.
And yet, the battle within is as powerful as those they face. Reign struggles to trust. Arielle’s no longer sure what she’s fighting for. And love is refusing to be denied.
The price of failure is unimaginable.
Because a plan has been put in motion that goes as far back as Adam and Eve. And dark forces will do anything to open the next Gate of Hell, bringing Lucifer one step closer to freedom.