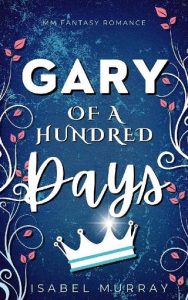 The Kingdom of Estla is in turmoil. Power plays, intrigue, and plots seethe in the corridors of power. And Gary of a Hundred Days, Last of the Tyrant Kings is…well, he’s pretty offended, actually?
Tyrant?
Seriously? Who is making this up?
Gary said no thanks, don’t want to be king, and they dragged him away from all he’s ever known and stuck a stupid crown on his head anyway.
As far as Gary’s concerned, all that political intrigue can go ahead and keep seething without him. He didn’t know or care a thing about it when he was the unwanted son of a backwater lord. He definitely doesn’t care about it now they tried to kill him and he’s on the run.
Minor problem: he managed to escape, but he’s all out of ideas. It’s dark, it’s raining, he’s in the middle of nowhere, and there might be bears. In fact, he’s pretty sure one is following him.
Luckily for Gary (it’s about time he had some good luck) his ex-stable master tracks him down, and it turns out that Magnus has more than a few interesting ideas about Gary and his future.
More specifically, about their future.