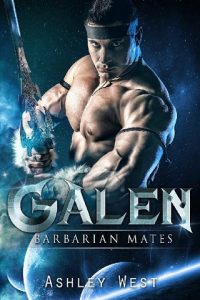 Alinsoth is, for all intents and purposes, a scrap yard. It’s an abandoned moon, floating in the middle of space, where refuse and other discarded things seem to collect. It’s also the base of the Amakari, barbarian people who use their weapons to speak for them and, occasionally, work as warriors for hire. They are a rough and tumble bunch, trying to keep out of sight of the Imperials, who rule most of the planets around them. It keeps them isolated, but this suits them fine.

Galen, one of the barbarians, has no problems with his life. He likes the fighting, and he tries not to remember his life before he came to Alinsoth. He’s brash and reckless and rude, which is perfect since he’s also one of the best fighters they have.
But when something crash lands on their little moon and it turns out to be a human woman who can’t remember who she is or how she got there, Galen will find out that he has a softer side, once he learns to trust her, that is. He has no idea who she is or why she’s so far from home, but the answers don’t stay hidden for long. In fact, eventually they come calling in the form of a giant warship, and the Amakari way of life, along with the woman Galen has come to care for, are heavily threatened.
File Details: