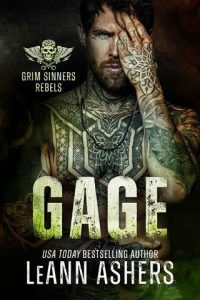 River
Who gets kidnapped twice in one day? Apparently, me. That’s who. But what I expected even less was to actually fall in love with my second kidnapper: Gage, the President of the Grim Sinners Rebels MC.
He was someone I never knew I needed. He rescued me.
He became my home.
His MC became my family.
Unfortunately, our new life together was in danger. The President of the rival MC decided to step up his game against the Grim Sinners Rebels. What he didn’t realize, however, was that the devil himself knew better. You don’t play chicken with the reaper.
And the reaper was Gage.