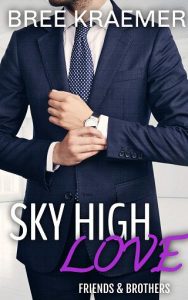 Welcome to the Friends & Brothers Series

Where three lifelong friends end up falling for one of the other friend’s brothers.

Sloan Hayes loves her job as a pilot. But lately, all the travel, the never seeing her family or friends, was getting to her.
Thanks to her two best friends, Camilla and Hazel, she knows she needs to make a change if she ever wants to get out of her funk.
She wasn’t expecting Asher Rickman to be her change.
Asher was Camilla’s older brother who moved away to live in London when he was in college. She hasn’t seen him in years until one night, out of the blue, she runs into him while in London.
He’s funny, smart and so sexy it makes her eyes hurt just looking at him.
But nothing can happen. He’s her best friend’s brother.
Asher hasn’t seen Sloan Hayes in who knows how long, but she’s no longer the lanky, pre-teen girl he remembered from his own teen years.
She was all woman.
And he wanted her.
There’s just one problem. She’s his sister’s best friend. And there is no way he can have her.
But he can’t stop thinking about her no matter how hard he tries.
Could he somehow convince her that it didn’t matter? That love could be worth it?

Hazel Landenberger believes there is a perfect person in the world for everyone. Only, hers is taking forever to show up. Until he does, she stays busy with her job as a county engineer and her two best friends. But then, an accident happens, injuring her badly with no one around to take care of her.
No one but Nash Hayes.
Nash is her friend Sloan’s brother and she’d never once had an impure thought about him.
He can’t say the same about her, though.
Years ago, Nash had secret feelings for his sister’s friend, but knowing nothing could ever come of them, pushed them deep down inside his heart, never to be seen again.
Or so he’d thought.
But seeing her in the ER, hurt and in pain, brought them barreling back to the surface. He wanted her. Badly. But would she feel the same way?
Could he convince her that he was her perfect man?

Camilla Rickman was a woman who knew what she wanted out of life.
Or at least she’d thought she did.
With both of her friends in love and on their way to being married, she’d started questioning her own life. Was she doing enough to put herself out there? To find her own happily-ever-after?
Deciding it’s now or never, she joins a gym only to find her best friend’s brother, Keaton at her first class.
Keaton had never been someone she’d thought about in any way other than brotherly.
Until she saw him working out.
Keaton’s been back in town a year and in that time, hadn’t done much socializing.
When he runs into his sister’s best friend Camilla at his workout, he doesn’t think anything of it until he sees her butt in those tight pants.
Now he can’t think of anything else.
It’s wrong and improper but he can’t stop himself.
He wants Camilla and nothing is going to change that.
But first, he has to find out if she feels the same way.