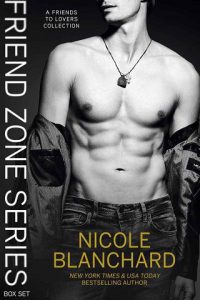 Book 1, Friend Zone
Charlie St. James is off limits. She’s been Liam Walsh’s best friend since grade school. He thought it wouldn’t be a big deal to let her crash with him when she needed a place to stay, but he was dead wrong. Knowing only a thin wall separates them when they sleep, that she’s naked in the shower while he lays in bed fantasizing about her, is unbearable. When their cozy two bedroom goes from friend zone to war zone, they’ll either burn up the sheets or go down in flames.

Book 2, Frenemies
Dashiel “Dash” Hampton lives to drive Layla Tate crazy because if he can’t have her beneath him, then he’ll have her any other way he can. He’ll get her to notice him, even if it means making her semester a living hell. When their classroom rivalry crosses the line between frenemies and forbidden, the hardest lesson they’ll have to learn is that sometimes you have to lose to win.

Book 3, Friends with Benefits
Tripp Wilder is more than a friend…but Ember Stevens is determined not to make him a boyfriend. Ember Stevens is everything he wants…but can’t have. Tripp lost his chance at a relationship with Ember years ago and has settled for being her BFF ever since. Now that she’s on the market again, he refuses to let his second chance with her pass him by.