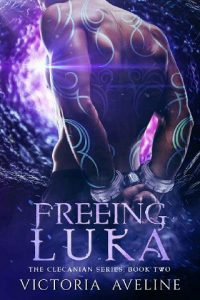 Luka has spent his life researching fertility in the hopes of discovering a cure for the Clecanians’ low birth rates. After years of working tirelessly with little progress, he becomes enraged when he uncovers a sinister plot to abduct compatible species from their home planets. But before he can tell anyone what he’s discovered, he’s captured, drugged, and thrown in a cell.

It’s just Alice’s luck that when she finally begins to get her life on track, she’s kidnapped by reptilian creatures and forced into a cell with a fierce incoherent alien for some kind of breeding experiment.
Even though they aren’t able to communicate, Alice and Luka find solace in each other’s company. As the days drag on, it becomes harder to keep her heart locked away, until she can’t help but wonder what a life with Luka might look like outside their dark prison. When an opportunity to free herself, Luka, and the other human prisoners presents itself, Alice takes it.
Once free, can Alice and Luka’s tenuous relationship survive on this planet? Will the evil men that held them prisoner ever see justice? And can they play a part in the rescue of the other women being held captive around this strange new world? Alice knows only one thing for certain—her life will never be the same again.