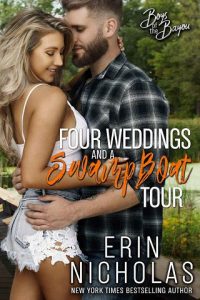 She’s been proposed to five times.

Five. She even said yes to one of them. And then broke his heart when she called it off. Not to mention her mother’s heart. And her grandmother’s. And his mother’s. And…you get the picture.

Paige Asher has now officially sworn off all dating. Diamonds give her hives. All she wants is to be a yoga-doing, cat-collecting, vegetarian in peace. Away from her marriage-crazy family and all their expectations. So when her weekend fling turns into a real friend and offers her a place to escape, she finds herself on his doorstep in Louisiana. And right in the middle of not just one family wedding, but three. Of course.

Charming, sexy bayou boy Mitch Landry gets stuff done. Whatever anyone needs. From alligator-sitting to getting a buddy drunk to showing a woman a good time to fixing a swamp boat, he’s the man. No problem. No drama. But he wants a hell of a lot more from Paige than a temporary friends-with-benefits arrangement. He wants to take care of her. And her five cats. He also really wants other men to stop asking her to marry them. But if a roommate and a few orgasms are all she wants, that’s what he’ll deliver. He can just be her friend and not commit the greatest sin of all…asking her for forever. Probably.