Home
Paranormal / Sci-Fi
Forget Me Not by Karissa Kinword (ePUB) 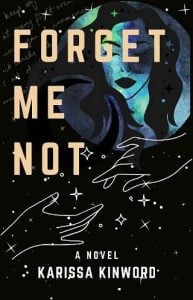 Forget Me Not by Karissa Kinword – Free eBooks Download

After years of forming an intimate bond with a mysterious man every time she closes her eyes to dream, a young woman, Eliza, forces herself to find a fulfilling life outside the confines of her own mind. Along with her partner Logan, she roams the safely discovered planets and moons of a newly traversable galaxy by inter-galactic transport, centuries after the evacuation of humans from Earth to a new home, Otera.
Silas, the unknown man in Eliza’s dreams has spent most of his life as a contract pirate, formally known as a Mako, mining the unexplored lands of dangerous moons to earn a living. Having dreamt about a woman he’s never met every night for as long as he can remember, Silas has never allowed himself a relationship that reaches beyond physical: confident that one day, he would find the woman in his fantasies somewhere in the universe.
With Silas returning to the Otera following a final job for a man to which he owes a debt; and Eliza heading back home after visiting the Glade moon with her partner– the two come face to face as both of their connection pods land on a transport vessel heading in the same direction.
Forced into the same proximity for the duration of travel, they struggle to understand what it means for them to finally meet when the universe seems to be pulling them both in different directions. Eliza, attached to, and traveling with her long-term partner. And Silas, fulfilling a dangerous deal with a crime syndicate with whom he has a past.
When the pair bond over their shared love for forgotten Earth-age classic literature, and the ways in which each have fallen in love with the other in their dreams, Eliza is torn between the life she’s always known on the Otera with her partner, and the infinite possibility of a future with the man she knows is her soulmate.