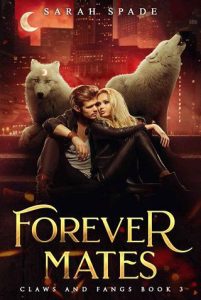 Saying our vows and becoming bonded mates was supposed to be the start of our “happily ever after”…
For most of my life, I’ve known that I was meant to be mated to Ryker Wolfson. We’ve hit some bumps along the way, but I finally decided I’d be better off following my heart over licking my wounded pride.

So, yeah, our Luna Ceremony was as eventful as the rest of our courtship. Ryker was challenged by his former Beta, and they had their fight to the death right beneath the moon. Ryker was left standing and I was mated in a bloody white dress.
Too bad Aleksander refused to accept my invite. My old vamp roomie would’ve gotten a kick out of that.

Still, now it’s official. I’m the Alpha female of the Mountainside Pack. Only I’m not just mated to the Alpha male—I’m a born Alpha myself and every wolf on the East Coast knows it.
Did I really expect that it wouldn’t get back to my birth pack? I might’ve ignored my bio-dad’s latest summons, but nothing says “go home” like his wolves snatching one of my packmates. And while I’m no fan of Trish Danvers, no way can I leave her with my cruel sperm donor and his goons.

I have to go. Without a Beta to watch over the pack, Ryker is forced to stay behind. He doesn’t like it, but he knows better than most that I can take care of myself.
I mean, he still has the scar over his heart to prove it.

But when I learn that my suspicions were right, that Trish’s abduction was a trap laid specifically for me, I have to rely on my belief that the moon got it right, that Ryker really is meant to be mine, and that we’ll be together forever.
Because one thing I know for sure? I won’t be able to take his rejection again…