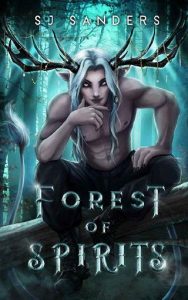 Never go into the forest alone. There are things that dwell within the woods. Things that came with the mist even as forests expanded or appeared where none before had been. Things that terrorize humanity and worse if rumor was to be accounted…people disappeared into the woods.

Humanity has done its best to limp along after the world went to hell. They hunted and tended the fields as they attempted to live the best lives with what they had. They wanted to pretend that everything was fine while avoiding the terror of the forest. Diana lived in a state of uneasy peace with the woods near her home until the same forest betrayed her and shifted her between worlds. There something hunts and devours men. And worse, it has intruded into the mortal world. Caught in a web of fate, Diana has no escape from the terror of her destiny awaiting her.

Silvas is the lucumo silvani and high king of the Eternal Forest. When he is alerted to the rise of a dangerous monster, one of the Tainted Ones half remembered in ancient myths, he is forced to take up the burden of harnessing death itself to protect both worlds of humanity and the denizens of the Eternal Forest. Betrayed once by the promise of love, he has no interest in forming a permanent bond with a human whose life-thread is woven into the upcoming events by the Fates. A role that is unclear even to the oracle. Yet as they face the darkness together, will he forge an alliance of flesh, blood and love with the one being who could destroy him?