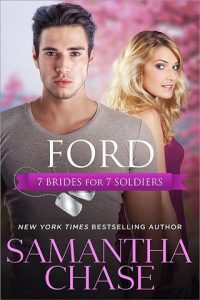 There are three things Ford Garrison wants more than anything: to build, to report to no one, and the chance to live his life without the prying eyes of the good folks of Eagle’s Ridge. Having spent ten years in the Navy as part of their construction battalion, he was able to live out most of that dream. Two out three wasn’t bad, right? Now that he’s out of the service, things aren’t falling into place quite as easily as he hoped and he ends up back home with all eyes on him.

It wasn’t as if Callie had gone out of her way to end up in Ford’s path, but somehow that happened all on its own and the town gossips were having a field day! Could she help it that she was living in the house Ford had hoped to claim as his own or that the work on his grandmother’s ranch meant they were living not fifty-feet away from each other?

Ford was determined to come home, do a job to help his grandmother and leave. Callie James is a distraction and she represents everything he has spent years running away from. Now he’s at odds with his friends, his family and himself about where his home and future are going to be.

Could he walk away from Eagle’s Ridge a second time?