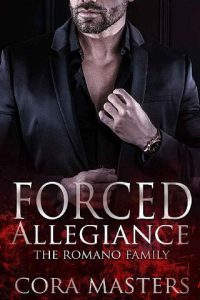 Three Families run the city. Three Families paint the streets in blood. But change is in the air, Bria canfeel it.
Unfortunately, she has no idea that the feeling means change is coming to destroy her world until it’s too late.

Bria is wild. Untamed. And the heir to the powerful Montrelli Family. She always had a picture of what her future would look like, and none of it involves being sold off to her enemies.
But plans change. And left with no choice, she marries a man who pisses her the hell off. A man who is dangerous to her in ways she never imagined. A mobster used to getting his way.
Not that he will with Bria. Something he’ll quickly learn.
Luciano Romano is arrogant. Angry at being forced to marry Bria. And seemingly determined to punish her for their forced union, no matter how she makes his heart race.
Yet, when a common enemy emerges from the shadows, Bria and Luciano will have to put their differences aside and work together to find the murderer filling their streets with bodies.
It doesn’t mean they accept their marriage or acknowledge the desire burning between them. But it does mean that this mafia king and queen will do anything they can to protect their people, no matter the price to their hearts. Or their souls.