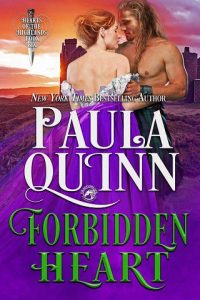 Galeren MacPherson never met a lass who wasn’t willing to offer herself up to him. But he doesn’t want that life. In fact, he swore a soon to end six-year vow of chastity to help him dedicate his life to one thing. Battle.

As captain of John Stewart, High Steward of Scotland’s army, Galeren is the only man trusted to bring the high steward’s niece to Scotland. The last thing Galeren wants to be is an escort to a novice from a nunnery. Especially when he sees her in the early morning dawn weeping on the cliffs. Throughout his life, he has felt the urge to flee from things, on the field and off. But he never fled. He conquered the urge and faced whatever it was, head on. But he never faced a force like the one placed in his path.
Novice Silene Sparrow is on her way to Scotland, where she will speak to the church council on her uncle’s behalf so that one day he may gain their support, being next in line for the throne.

Raised in the priory and groomed to give her life to the Lord, she rarely leaves the church’s land in Bamburgh, so she is unprepared for her rough and rowdy Highland escorts. Their leader is a tall, broad, golden warrior who vows to protect her, and does. He is a savage and she does everything to resist him. But how does one resist a man with a kitten cuddled in the crook of his neck? No matter what he has trained to be, he is patient and gentle with her. He begins to get into her blood, her bones. When he kisses her, slowly, passionately, eager for more, he makes her question her future vows.

But Silene’s heart is forbidden. If she lets Captain MacPherson have it, her uncle will lose the church’s support and they likely won’t live a day before he has them hunted down and possibly killed.
How much will Galeren and Silene risk for love?