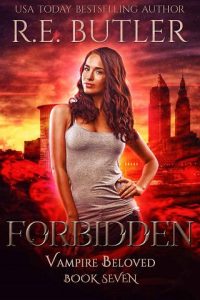 Pamela Thomas is living a lie and she’s terrified of discovery. When her boss, Jason Finnegan—head of the anti-vampire group the First Church of Humanity—tasked her with infiltrating the coven to destroy them, she’d foolishly hoped to be finished within a week. A month later, she was no closer to helping Jason take down the coven than before she started. And worse? She finds herself constantly fighting feelings for a vampire named Ven. Fearing if she doesn’t get away from the coven soon, she’ll be compelled by Ven and turned against her will.

Vampire Ven’s watched all his friends find their beloved mates in the last few years. He’s the only remaining single male in the family, and he’s damn lonely. Until he feels compelled to go into the club during the day and finds a beautiful human female working as a custodian. He knows the reason he’s drawn to her is that she’s his truemate, but the standoffish female wants nothing to do with him. He plans to do everything in his power to win her affections, and he starts by upgrading her living situation from the hellhole she’d been renting to one of the coven’s private residences downtown.

Pamela—who goes by Ela when she’s working at the club—doesn’t know what to think as Ven slowly wins her over. Her whole adult life, she’s been told that vampires only want to kill and destroy, but Ven seems very intent on being amazing to her. A first kiss turns into much more, and she finds herself battling internally between staying true to Jason and his cause and falling head-first for the sexy vampire. When her connection to the church comes out and she learns firsthand how Jason treats his enemies, she’ll have to decide whether the love blooming in her heart for Ven is worth everything. Maybe even her life.