Home
contemporary romance
Fool Me Once by Jessica McBrayer (ePUB) 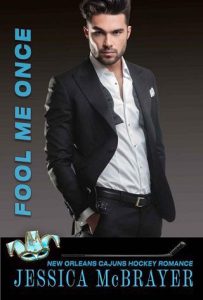 What happens in Vegas doesn’t always stay in Vegas.

Chemistry has never been a problem between Reese Stone, the owner of the New Orleans Cajuns, and Sophie Taggart, the big sister of the Cajuns’ starting goalie. The two have danced around each other for four long years until one bachelor-bachelorette party in Vegas changes everything.

After a wild night, where shots of tequila may or may not have been involved, Sophie and Reese wake up with matching wedding rings, an official marriage certificate, and hazy memories of the night before. The newlyweds decide to get an annulment so they can take a step back and get to know each other better before making such a big commitment. That is until they find out that someone sold pictures of them leaving the chapel. The news of their marriage goes viral.

With sponsors watching Reese’s every move, waiting for him to mess up so they can pull out, and with the NHL waiting for him to mismanage his team, Reese must make sure his reputation stays above reproach. He’s a famous billionaire and the youngest team owner there has ever been. His management style is unorthodox and it’s made a lot of people nervous. What looks like a one-night stand turned quickie marriage, has the potential to damage Reese’s tenuous standing. A hasty divorce would make it even worse.

As if Reese’s life isn’t crazy enough, a stalker turned cult leader, who has been harassing him since his software development years. It’s only a matter of time before Father Isaiah, the cult leader of an anti-tech ‘church’, figures out Sophie is Reese’s weak spot and targets her.

To keep her safe and to let his critics have a chance to quiet down, they agree to stay married for six months and then quietly get divorced.

But Reese doesn’t want to let Sophie go. And he’s going to work damn hard to make all his troubles go away and find a way to convince her to stay with him after the six months end.

Even with help, it’s proving difficult to eliminate all the threats against them. The danger is mounting and Reese’s only concern is for his wife. He could care less if his whole damn world burns to the ground as long as he and Sophie are left standing at the end.

But it might already be too late for that.