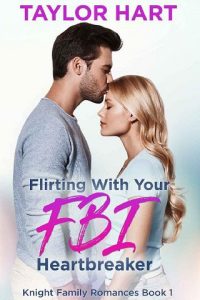 Agent Sam Knight doesn’t want to be on this assignment, but when he discovers that his ex from seven years ago is engaged to a killer, nothing will stop him from saving her. Even if it breaks his heart all over again.
Alexa Fulbright doesn’t expect the man she’s been trying to forget for the past 7 years to show up on assignment from the FBI…and she really doesn’t expect him to kiss her.
Sam Knight doesn’t want to be on this assignment, even though he requested it. He doesn’t want to see Alexa and he definitely doesn’t want to put away the thug she calls her boyfriend…but most things in life aren’t fair when it comes to her.
As Sam tries to convince Alexa that her boyfriend is a drug dealer with connections to the Columbian cartel, she doesn’t believe it, until a gun is pointed at her head and ‘said boyfriend’ puts a bullet in Sam’s shoulder.
Now Sam has to get her out of dodge and Alexa has to make a choice—face the past or live a lie that could destroy her and everyone she’s ever loved.

Note: This is now 3 books in one. Previously released titles: On the Run, Going Rogue, Catch me if you Can.
Now all together in Flirting with Her FBI Heartbreaker. This book has been extensively re-written, re-edited, and updated to be included in the Knight Family Romances.