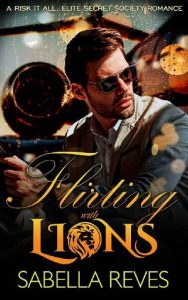 When her high-pressure career as a New York City chef became too much to handle, Rhea Ward kissed it all goodbye – signing up on a whim to fly the friendly skies as a private contract flight attendant for a ruthless business man. Rhea thought she’d be escaping the stress, strain, and drama of the big city by serving cocktails and canapés at 40,000 feet – but the moment she met HIM, Rhea realized the drama was just beginning.

Ames needed to send Vasquez a message about what was permitted on his island, and he was determined to control his life – and if that meant the mysterious billionaire had to deal with the man that had ruined him, all in the face of an oncoming hurricane. Dealing with the Order of Lions was a risk he was willing to take.
After the storm battered flight crew hunker down on his storm-swept island, Ames realizes he’s got more than just his next billion dollar business dealings to navigate to this tropical paradise – he’s invited HER into his life, without a thought to the complications…

Now, they’re stuck together – and while the hurricane rages outside, Ames and Rhea have to weather an equally powerful storm of attraction brewing between them.
Ruthless, dominant, and rippling with alpha male intensity, Ames always gets what he wants – and from the moment he lays eyes on this street-smart, sassy girl from the Big Apple, he wants her.

But there’s more to Rhea than meets the eye – and as his feelings for her grow, Ames realizes he’ll have to risk it all if he ever wants to stand a chance at being with this incredible woman; including sacrificing the last connection he’d fought to earn within a shadowy, secret society of billionaires known as the Order of Lions.
There’s everything to play for, everything to lose, and tough choices ahead for the both of them before this storm will finally be over…