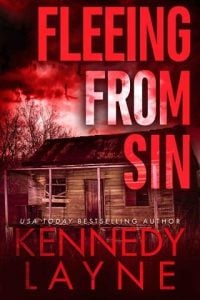 From obsession to death, this pulse-pounding thriller within the Touch of Evil Series by bestselling author Kennedy Layne will leave you looking over your shoulder…

Former FBI consultant Brooklyn Sloane is about to walk into her favorite café wanting nothing more than her usual morning caramel macchiato when she notices a bloody handprint on the window. Anyone else would have instructed the barista to call the police, picked up her favorite beverage off the counter, and then walked the rest of the way to the office.
Brook isn’t just anyone, though. She recognizes the signature of a serial killer who used to haunt the city over three years ago before he abruptly disappeared into the restless wind. He had been known to stalk his victims for weeks before abducting and killing them. Their bodies had never been found, but he’d made sure that their loved ones knew of their demise with a single, bloody handprint…at the very place that they had gone missing.
Brook has one objective—draft a profile to find the killer before he strikes again. But as the team dives deeper into the case and into the lives of the previous victims, a twist in the investigation finally reveals itself. The killer has been dead ever since the previous killings had stopped. Are they chasing a copycat killer or something far worse?