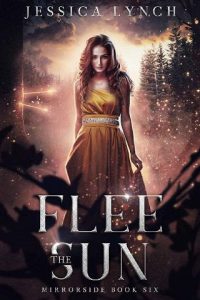 The god of the sun doesn’t believe in second chances… but he does believe in Daphne.

In the Other, the Greek gods and goddesses are trapped by magic to relive out their myths in newer, more modern incarnations. For centuries, people find their way to this fantastical world, only to follow a script from an ancient time… until the reborn Artemis changed everything.
Now it’s her twin’s turn to find his fated soulmate…

Daphne
My cousin is… gone.
I went to visit Willow in her new condo after our friend group hasn’t heard from her for a couple of days. Being too busy to take my calls—I’m used to that from my scatterbrained cousin. But then I let myself in with the spare key she gave me for safekeeping, and it doesn’t take long before I realize that she’s missing—and that she’s in trouble.
Willow doesn’t go anywhere without her phone, but I find it next to the mirror in her bedroom. Hoping it has some clue to what happened to her, I search it, and quickly discover that something really effing weird is going on here.
I’ve spent my whole life watching out for her. As the older cousin, I have this urge to keep her safe… which is way I don’t even think twice before I follow behind her into a whole other world that really shouldn’t exist.
All I want is to get Willow back. I’ll do anything for her, and nothing will stop me.
Not even the most irritating yet undeniably handsome man I’ve ever met in my life…

Alex
After how things didn’t quite work out between Apollo and Cassandra, I told myself that I wasn’t going to let the Other put me through its paces ever again. I’m the Sun God, one of the Twelve, and now that my twin sister is where she belongs, I’m content to leave things the way they are.
Of course, the Fates had to take that as a dare. Right when I’m not expecting it, they send me Daphne. It doesn’t take an oracle to know who she is, or why she’s here. Godsdamn it, she even has the same name as Apollo’s nymph that got away.
I know better than to let the magic of the Other suck me in. Especially with Cassandra’s latest prophecy hanging over my head, I should let the fiery redhead go off on her own when she makes it clear that she wants nothing to do with me.
But I don’t. I can’t. Just like the story’s been told before, when Daphne flees, all I can do is chase.
And lucky me—I chase her all the way to the Underworld.
Maybe I should’ve believed Cassandra after all…