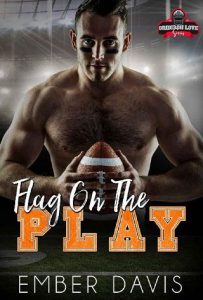 COOPER
When there’s a lot to celebrate, my teammates make sure it’s done in style. The season has just begun, but this year is special, I can feel it. We have a new quarterback at the helm of the Denver Mustangs, and he has connections which have nothing to do with his NFL fame. That’s why we’re at the hottest club in Denver celebrating the first home game of the season, even if we can’t get wild.
I didn’t expect to be captivated by a gorgeous, curvy woman while out at Aces, but now that I’ve seen her, I know she’s mine. Georgia can run from me all she wants, but it just makes me want to chase her. I can see she doesn’t trust me, but I’m going to change her mind.
This year is going to be the best one yet, on the field and off. I’m going to get the girl, the team is going to have a winning season, and everything will be right in the world. I just need to convince my girl that she’s made for me without a penalty flag being thrown. Easy, right?

GEORGIA
When Iris, one of my salon clients and friends, invited me out to Aces, I almost said no. But who can refuse a free night out on the town? I guess it helps to know the owners. Maybe a night out is exactly what I need to shake things up in my life.
I didn’t know I’d be part of the Denver Mustangs celebrating their first home game with a new quarterback and the championship shining like stars in their eyes. Being surrounded by large, hunky men is a bonus. I’ve learned I can look but touching and getting involved doesn’t work out for me.
There’s a flag on the play, though, when Cooper Graves sets his sights on me. He might play defensive back on the field, but, when it comes to me, he’s all about playing offense. He can’t really want me and all my curves, right? When he doesn’t give up, can I give into him and everything he’s promising me?