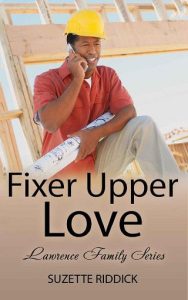 Garrison Lawrence has done his job raising his three girls following the death of his wife. Now that his daughters are grown and successful, the only thing he has left is his contracting business buying and flipping properties to occupy his time.
Although he swore after his wife’s untimely passing that he would never commit himself to another woman, Garrison begins to rethink his decision. Witnessing his daughter fall in love leaves him yearning for companionship beyond the occasional trysts to satisfy his carnal needs.

Divorcée Madeline “Maddie” Redmond is eager for a fresh start in a new city. Leaving behind heartache, she’s ready to move on with her life without a man in it. The only way she knows how to do this is to immerse herself in her work as a behavioral health specialist.
A romantic entanglement isn’t what she’s looking for when she meets Garrison Lawrence, her landlord. When she learns he’s a widower, Madeline allows her heart to open up to the possibility of something special.

What starts off as a blossoming relationship is shattered by ghosts from the past. Will Garrison and Madeline be able to find love a second time around?