Home
contemporary romance
First, Last, and in Between by Jamie Bennett (ePUB) 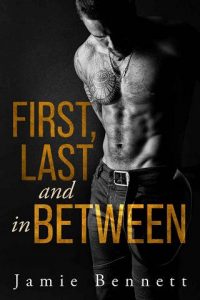 First, Last, and in Between by Jamie Bennett – Free eBooks Download

“Isobel with an O, Starr with two Rs,” I said to her pleasantly. “It’s been a while.”
Isobel’s lips moved as she mouthed words. Damned if she wasn’t praying.

Eight years. That’s how long it’s been since Rory Morin went away, but now he’s back in Detroit to clean up his life. Eight years before, Isobel Starr made an appearance in it, and now he’s come looking for her—and she knows that she owes him.
Isobel never left the city. She’s been getting by and doing better than when she first met Rory. Back then, she was a little kid hiding in the dark from him, a giant of a guy who scared people so much with his size and scowl that they crossed the street to avoid him.
She doesn’t think that she’s same person anymore, but is he? Has Rory really changed after spending eight years of his life in prison? Can she trust him, and can she trust her own feelings for him?
And when Rory’s past comes roaring back and threatens them both, will they be able to survive it?