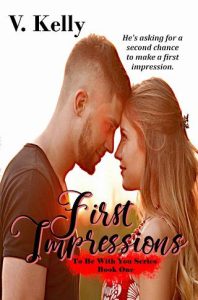 First Impressions (To Be With You #1) by V. Kelly – Free eBooks Download

This is a NA book and is intended for 18+ readers. It contains adult language, sexual innuendos, adult humor and mild sexual encounters with situations that could be uncomfortable for some readers. Also if you have a soft spot for squirrels, you may or may not want to read this book . . . Please keep these warnings in mind, and I hope you enjoy.

When Gabby Meyers and Trace Martin first met, it ended up being one horrible misunderstanding after another. Trace only wanted to get to know her; she thought he only wanted to get into her pants. Between Gabby’s trust issues and Trace’s uncanny ability to make a lousy first impression, their relationship was doomed from the start.

Trace isn’t going to let one misunderstanding stand in the way of his heart. Determined to make her fall for him, Trace has to overcome a series of obstacles: a womanizing asshole who wants to add a notch in his bedpost; a crazy, overprotective father who wants Trace to participate in something called the “Man Test”; and a psycho one-night stand that won’t leave Gabby alone.

His biggest obstacle, however, is the giant wall around Gabby’s heart.
You only get once chance to make a first impression, but Trace is asking for a second shot.