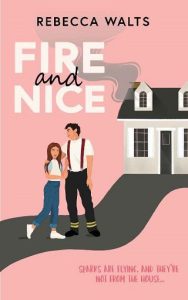 She’s planning to be single forever. He’s hoping to find Mrs. Right.
It’s a war between hearts and hormones when they end up as unexpected roommates.

Cherry Beckett has sworn off of love. Such a cliché, right? Still, she wants nothing to do with it. One-night stands? Sure. Friends with benefits? Maybe. Anything beyond that? Absolutely not. She’s been there and done that – twice, actually – and she has no desire to let it happen again.
Dawson Lee hasn’t dated since his last relationship crashed and burned over a year ago. As a volunteer firefighter, he’d rather deal with actual fires. He might be a romantic at heart, but love just doesn’t seem to be in the cards for him right now, and that’s fine. At least, that’s what he’s going to keep telling himself until the future Mrs. Lee comes along. He didn’t expect her to be wielding a lamp and cursing him out when she finally showed up, though.
On a normal day, Cherry and Dawson’s paths probably wouldn’t have crossed. But the morning Cherry’s house catches fire is anything but normal. Forced to find a new place to live until her house is repaired, she ends up with an unexpected roommate, something that feels suspiciously like a new best friend, and a chance to make her dreams come true.
As her time in the tiny garage apartment comes to an end, she has everything she wants… but what about the one thing she swore she didn’t need?