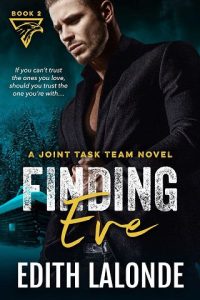 Lead or leave…
Undercover operative Adam Grayson is used to walking a fine line between two worlds. The problem is he doesn’t really exist in either. After his father is murdered, Adam must decide—step up and lead the Joint Task Team or make like a ghost and disappear. His decision is complicated by the discovery of an unconscious woman in a snowdrift. Eve is everything he’s ever wanted. But there’s a risk. Loving him makes her a target, too.

Heal her heart…
Healing others may be physical therapist Eve Langley’s calling, but she’s spent a lifetime suffering from a broken heart. Betrayed by her adoptive family, Eve’s given up on finding her happily ever after. But when a hotter than Hades stranger rescues her from certain death, she’s caught off guard by her attraction to Adam…and the people he protects.

Make her his…
Adam will do anything to keep Eve safe—and with him. All he has to do is convince her he’s the family she’s been searching for, find a serial killer, and deal with a team of hard-core black ops soldiers eager for their next assignment. Easy for a guy used to facing danger alone, right?

MEET THE JOINT TASK TEAM
As members of a black ops unit, the men of the Joint Task Team are the best of the best when it comes to covert operations. Brought together to protect their country from enemies near and far, there’s only one thing these soldiers need to survive—the love of a strong woman. Tough, dangerous, and fiercely protective of the people they love, these males will melt your heart, along with your panties.