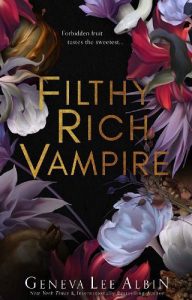 Julian Rousseaux has a problem. He’s single, and for the world’s wealthiest vampires, the social season is about to begin. Julian would rather stake himself than participate in the marriage market. But as the eldest, eligible Rousseaux he’s expected to find a wife before the season ends—whether he likes it or not.
When cellist Thea literally stumbles into his life at a gala, he knows she’s the last person he could ever fall in love with. She’s too innocent, too kind, and way too human. But now that she knows about his world, she’s also a walking target. She needs protection. He needs a fake girlfriend to discourage overzealous vampire matchmaking.
So, Julian makes Thea an irresistible offer: pretend to be his lover and he’ll change her life. For one year, they’ll attend the season’s social events together in exchange for his protection and a way out of her mother’s crippling medical debt.
She can’t say no. But the vampire world is impossibly decadent and darker than Thea ever imagined, and Julian’s filthy rich vampire family wants her out of the way. But with each moment they share, new dangers emerge: a desire as forbidden as their stolen touches, an awakening of a long-dead heart, and secrets that could tear them both apart.