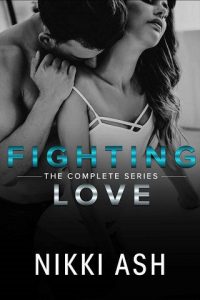 ✔️ Secret babies ✔️ Single parents ✔️ Sexy MMA fighters ✔️ Laugh out loud banter ✔️ ALL the feels
The Fighting Love series is complete, and for the first time ever, you can grab all three books in one box set. The complete Fighting Love collection includes: Tapping Out, Clinched, and Takedown. It also includes the first two chapters of My Kind of Love, the first book in the spin-off series, Finding Love, which is releasing in January!

Tapping Out: Being a fighter is in my blood. My grandfather was a fighter, my father was a fighter, and I’m a fighter. I live for the rush of adrenaline and sensation of victory. When I fight, I give it my all. I step into the octagon and I fight until there’s nothing left to fight for. He’s been my best friend for most of my life. I’ve fought with him, fought against him, and for the longest time I fought for him, for us. Until he pushed me away, leaving me no choice but to tap-out.

Fighting is what saved me. It shed the old me and I became a newer shinier version of myself. Until it took away everything I loved. I gave up and tapped out. Then one day, she came back into my life and reminded me that some things in life are worth fighting for. Now I’m fighting for us, day by day, proving to her that our happily ever after is worth fighting for.

Clinched: Charlie is everything I want and didn’t realize I need. It’s clear to me now that the woman I met at the club is only one layer of the woman I’m falling for. I’m a fixer by nature but for the first time I wouldn’t fix a thing. I want her just the way she is. Broken pieces and all. Who needs the fairy tale when we can have the reality.

Tristan is everything I want, yet don’t deserve. He’s loving, protective, smart, an amazing father, and he’s on to me. That’s why I need to speed this story up and tell him everything, so we can flip to the end of the book, and him and his daughter can move on to the next story. One where they get a happily ever after. Because there’s no story I’m a part of that ends in any way but tragedy.

Takedown: Mila – Pregnant and married at the young age of eighteen, I settled into my life not knowing there could ever be more.
Until Mason, with his sexy smirk and magnetic baby blue eyes. With a single look and a few words, he made me feel sexy and alive. But as quickly as he came into my life, he was gone, leaving me wanting more. A few days later my mom died, and her final words of advice—life’s too short to settle—are what I vowed to live my life by. Not even a year after her death, I was divorced and ready to find the one. Only I didn’t realize how difficult it would be to find someone who could make me feel the way Mason did. Five years later, and I’m still single, looking for my forever.

Mason – I’m the guy who fights and f*cks. The guy who goes fishing but never keeps what he catches. The responsibility that comes with commitment isn’t for me.Until Mila comes back into my life making me want things I’ve never imagined wanting. Now, the man I’ve always been is quickly losing the fight against the man I want to be. I’m supposed to want the woman who wants the right now. Yet, I’m falling for the woman who wants the forever.