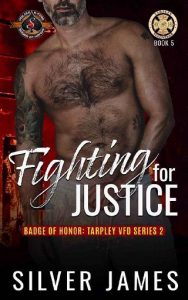 A lone Wolf in the Lone Star state…
Former Texas ranger Jack Riggs is now the duly appointed sheriff of Bandera County. He has two problems: the bad hombres kidnapping women and the pretty woman his wolf wants to claim. At his age, he figured his wolf half knew better and besides, what does he know about wooing a woman? Better to stick with fighting crime. He understands bad guys. Women? Not so much. Can an old Wolf’s learn new tricks before it’s too late?

A woman with a soft heart…
Justice McAlester runs Wind Wolf Ranch Wildlife Rehab Center, is a firefighter with the Tarpley VFD, and now has to wrangle her teenage niece. She doesn’t have time for the handsome man with the star on his chest, or the stars he puts in her eyes. She’s perfectly capable of going it alone, but when Jack Riggs looks her way, she can’t deny the attraction. If she’s not careful, he’ll ignite her desire.

Crime, corruption, and cartels…
Fighting for Justice is pure instinct when she’s threatened by outlaw bikers linked to a cartel. Right or wrong, a Wolf has to do whatever it takes to protect those he’s claimed.