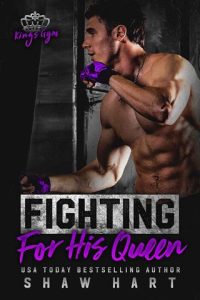 He’s found his princess, but will he be able to free her from the tower that she’s locked herself in?

Kit King is used to fighting for what he wants.
He worked hard to make it as a professional MMA fighter until that was crushed by a career ending injury.
Then he worked hard to heal and open his own gym and now he runs one of the busiest gyms in Pittsburgh.
When he saves Stella one night from a mugger, he realizes that he may have just found his most important fight of all.
Stella has been taking care of herself for her whole life and isn’t about to just hand over control to some guy, even if he is super hot and did save her life.
Between her boss and her creepy roommate, she’s over men. Her knight in shining boxing shorts isn’t giving up that easily though.
Kit is used to fighting for what he wants, and what he wants is his Princess.
Will this tough fighter be able to make it past Stella’s defenses?