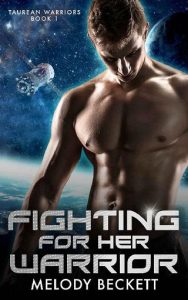 A woman on a mission to save humanity.
A scarred warrior granted one last chance to prove his worth.

Space Force veteran Laila Storey thinks she’s seen it all—until first contact with an insectoid alien race, the Xakul, destroys a fledgling Martian colony. The Xakul’s next target? Earth.
Humanity’s only hope is the Taureans, a warrior race who has battled the Xakul and won. Laila must learn from the Taureans how to beat the Xakul, before Earth is destroyed. She doesn’t have time for love… even if one particular Taurean warrior makes her heart race.
Commander Zac Qu’Rell wants back in the fight, but his last battle with the Xakul wiped out his entire team, and left him badly scarred. Yet when he meets Laila, he feels whole once more.
When a mission goes wrong, trapping them on a Xakul occupied planet, they realise there is more at stake than they thought. And with temperatures rising, both on and off the battlefield, there’s no time for love… is there?