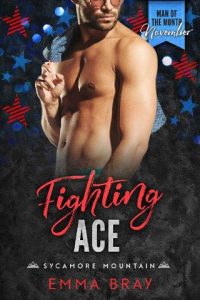 Jessa Jeffrey is tired of writing silly fashion columns that don’t mean anything in the grand scheme of things. She wants to be a serious reporter. She wants her writing to mean something. She wants to report on groundbreaking stories that will change the world.
Her passion lies in politics and world events, but no one will take her seriously. Her boss finally agrees to give her the break she’s looking for—but only if she can snag an interview with grumpy war hero Riker Morin turned MMA fighter.
Riker Morin may be a veteran, but he doesn’t consider himself a hero. He refuses to speak to the press and be painted as a hero when he knows the truth about what happened on the field that day. Instead, he takes out his aggression the only way he knows how—through fighting.
Jessa has been given a near-impossible assignment, but she’s determined to persevere because isn’t that what makes a good reporter?
Riker has felt nothing but rage for the past ten years—until he looks into the innocent young reporter’s pretty blue eyes. Eyes the color of a cloudless summer sky. Eyes that remind him of what life was like before the war.
Eyes that have him finally willing to confess everything.