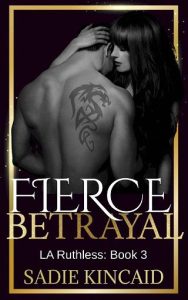 Fierce Betrayal is a standalone dad’s best friend, age gap dark mafia romance.
It contains NO cheating and a HE.

Jackson Decker is everything I’ve ever wanted. Fierce. Loyal. Not to mention tall, tattooed and hotter than the earth’s core.
Too bad there are so many reasons why he’s off limits. He’s old enough to be my father, but even worse than that, he is the right-hand man of head of the Spanish Mafia, who just happens to be my dad. So that loyalty I admire in him so much is also the reason he will never look at me the way I want him to.
But when we start working together, sparks fly in ways that neither of us expected. One passionate night later, he ends us before we begin when he tells me ‘this can never happen again.’
However, fate has other ideas, and when my life is in danger and I’m forced to leave LA with my young son, it’s Jackson who protects us both. Taking us to the ranch where he was raised and facing the demons of his own past in the process.
The weather isn’t the only thing that heats up in Texas and before long the attraction between us can no longer be denied.
But with so many obstacles in our way, how can we ever have a future together? Because when my father finds out about the two of us, there will be hell to pay. Can the head of the Montoya family ever forgive the ultimate betrayal?

Fierce Betrayal will take you on a rollercoaster of emotions. Full of tension and steam. It is book 3 in the LA Ruthless series, featuring the Montoya crime family.