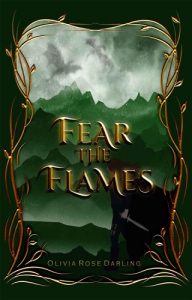 Elowen Atarah, Princess of Imirath, came into the world like a firestorm made flesh. A princess with a link to five dragons should have been a blessing to her kingdom, but her blessing became her curse. The little girl in shackles became a knife wielding woman with a thirst for retaliation.
Now, Queen of Aestilian, a secret kingdom she forged through strength and survival, Elowen needs a way to feed her rising population. She never thought she would have the force to take on Imirath, but when the snarky Commander Cayden Veles of Vareveth, her father’s enemy kingdom, offers her a deal she’s been dreaming of for years, how can she not take it? Even if he ignites her temper like no other, nothing unites two begrudging allies more than a common enemy.
The pair of them, along with three accomplices, will navigate their partnership, politics, and attempt to pull off the greatest heist their world has ever known. Five people, all united through revenge, will have to transcend the odds stacked against them and infiltrate “The Impenetrable Castle” if they want to reap their rewards before someone reaps their souls. Putting aside their differences to accomplish a common goal because everyone knows…vengeance is a promise signed in blood.