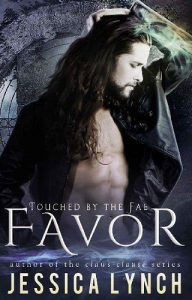 Never ask a favor of a Fae.
As a rule, the Fae don’t do favors. It’s not how they’re wired. Capricious and self-serving, unless you have an unbreakable bond with one of the fantastical creatures, you can be sure that they have no interest in helping you at all.
But if one of the Fae is in your debt… well that changes things, doesn’t it?
Callie Brooks learns that the hard way when the Fae Queen sends soldiers after her family. Her mate is a Light Fae, and he’d been one of the Fae Queen’s favored guards until he left Faerie behind to be with Callie. And while their union was frowned upon, they were left alone–until their daughter was born.
A daughter who can walk through shadows.
Callie and Ash won’t let anyone get their hands on their baby. When it becomes obvious that the two of them alone won’t be enough to protect her, Ash sends his mate and child on a dangerous mission.
Because sometimes it takes a Dark Fae to get the job done. And, thank Oberon, Ash’s old acquaintance owes him a debt.
It’s time to call it in.