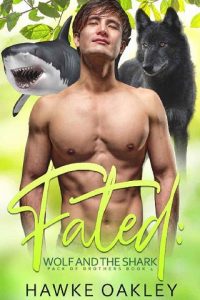 Remington’s life isn’t rainbows and sunshine. Even though fate took mercy on him in the form of a loving new pack, he still has nightmares about his hard life as a stray. Old scars make it difficult for him to trust. Can he ever truly heal?
When he realizes just how jaded he’s become, Remington runs away. But old dangers lurk in the shadowy corners of the wildlife reserve, and without his pack’s protection, Remington is alone and vulnerable.
As his heat strikes in the wrong place at the wrong time, fate sends him a guardian angel. The alpha smells like sea-salt and musk—and also like the home Remington’s been searching for his whole life.
A shark with a heart of gold.
Nero’s animal form may be a carnivorous fish, but he’s nowhere near cold-blooded. After being reunited with his brother and long-lost mother, Nero knows he wants to start a family of his own. But he’s only just awakened to his status as an alpha and a shark shifter. He has a lot to learn. Romance can wait.
Or so Nero thinks, until he tastes a delectable scent more potent than blood in the water—a scent so alluring that its pull can only be described as destiny.