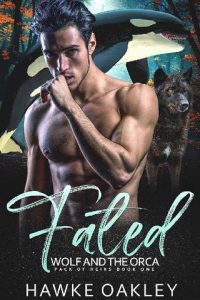 Zak:
Zakariel isn’t like other wolf shifters. He’s better.
As the grandson of a water spirit, he possesses unique powers. Plus, Zak’s parents are fated mates. So finding an omega shouldn’t be a problem, right?
Wrong. Ever since an ornery omega orca attempted to drown him, Zak’s life has been nothing but trouble. Kamari is a killer whale omega with a killer bod. But though he’s sexy as hell, he’s bullheaded and proud— and worst of all, he thinks he’s too good for Zak.
Zak won’t waste his time on an omega who hates him, especially not when he’s searching for his fated mate. But when Kamari looks at him with those deep dark eyes and grudgingly asks for his help, Zak can’t help but be sucked in like a whirlpool.

Kamari:
Nothing pisses Kamari off more than alphas. Particularly arrogant four-legged furball wolf alphas who think they’re owed everything on a silver platter.
Kamari runs a safe haven for aquatic omegas, protecting them from alphas. Since the spirit guarding their waters disappeared and threw the coast into chaos, Kamari’s had his work cut out for him. It only gets worse when a douchebag wolf shows up and claims he’s the spirit’s descendant.
No big deal. Kamari has to deal with Zakariel long enough to save his haven and then they’ll split forever. Good riddance.
He just has to pretend that Zakariel doesn’t set his heart on fire.