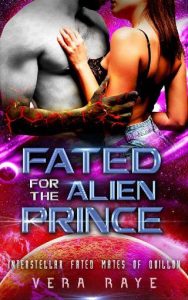 She’s a nobody from Earth. He’s an alien prince—who wants to claim her as his forever mate.

Erin: The contract’s simple. Travel across the universe and marry a powerful alien prince. If it saves Erin’s planet from deadly invaders and keeps her little sister safe, she’ll do anything.
Then she meets Kyren. He claims she’s his soulmate, that she belongs to him alone. A fearsome warrior, he has horns, fangs, and fiery hands—whenever he touches her, she melts.
For one month, she’ll be his, but then she must decide. Return to Earth and the family who needs her or remain on Quillion as his fated bride.

Kyren: Soulmates are for the warrior class, not royalty like Kyren. But he’ll do what he must for his planet and throne. He’ll seduce the Earth female who has been Selected for him and convince her she’s his.
But Erin is soft and small and too lovely for a hardened alien leader like him. He wants her. Forever. And with the Blaze spiraling inside him, his time is running out.
If he doesn’t claim her as his fated mate, he’ll succumb to the flames.