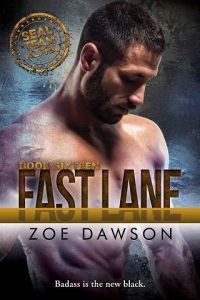 After Somalia and the mission that had thrown him once again into the same orbit as his ex-wife, Solace Mitchell, Fast Lane is struggling with his emotions and his love for her. But too soon, before he’s even nicked the surface of his torment, he finds himself working with her in Jalalabad, Afghanistan. Together they’re assigned the highly classified mission to take down Zasha Vasiliev coalescing into a terrible and deadly encounter with the vindictive woman and her terrorist allies, leaving the team devastated.

Solace can’t believe she’s once again working with her estranged ex-husband. Ford had always been a force to be reckoned with when she was married to him, but as the years have passed, her memories of him have started to dominate her mind. After seeing him during that harrowing time in Somalia, she hasn’t been able to go back to forgetting him. Now they were thrown together in the scariest, most hostile, and dangerous place on the face of the earth. They must fight for their lives even as she starts to reconnect to him, discover that he still loves her and deal with the fact that her heart had been blown to pieces when they separated. Could she trust that he has changed and if they don’t die, would a future between them be possible?