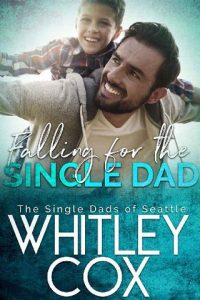 When a blast from the past could blow up the future.

Single Dad of Seattle, Liam Dixon has a kick-*ss life. He’s a successful divorce attorney with a great kid, and an ongoing Wednesday night no-strings booty call. But seeing his fellow single dads fall in love and happier than ever, he begins to question his own life. He wants more with Richelle. A future. Finally ready to sweep Richelle off her feet, a woman who broke his heart over twenty years ago unexpectedly knocks on his door desperate for his help.
Single mom, Richelle LaRue might not be five-feet-tall, but her personality and strength are that of an Amazon. She takes no prisoners and gives zero f*cks. A damn good divorce attorney, she won’t let any man push her around, including Liam and his ridiculous idea of a “relationship.” If it’s not broke, don’t fix it. With her past behind her, life is finally good and she’s determined to give her daughter a bright and shiny future.
But when Liam’s ex shows up, her story rocks Richelle to her core, and she and Liam take the woman’s case. What should be a simple divorce suddenly turns dangerous. Richelle finds herself–and those she loves–caught in the crossfire while Liam is torn between the past and the present, with their future dangling precariously in the balance.
Can Richelle let down her walls and trust when everything she holds dear is threatened, or will finally falling for the single dad be more than her heart can bear?