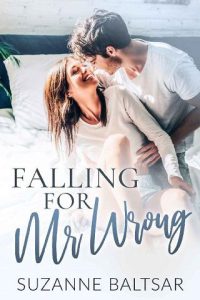 Sometimes the guy who seems all wrong is exactly right.

Bronte Hollinger’s quiet life suits her. She’s got a good job, a wonderful family, and a perfect-on-paper boyfriend. Sure, he can’t seem to focus on anything but his job, but they’ve been together so long she’s gotten used to it. The last thing she needs is a disruption in the form of a mysterious and handsome seatmate on a flight to her Pennsylvania hometown. Despite trying to resist him, Bronte can’t ignore the instant and undeniable connection to the man.
After hitting rock bottom, famous actor Chris “CJ” Cunningham is looking for an escape. Hoping to leave his bad boy image behind in Hollywood, he hides out three thousand miles away, but a chance meeting with a beautiful stranger on his flight east is a wake-up call he wasn’t expecting. Bookish Bronte doesn’t seem to know who “CJ Cunningham” is, and he leans into his newfound anonymity, taking advantage of the fact that the woman he can’t stop thinking about is the literal girl next door.
Bronte fights her feelings for Chris, trying to live the life she’s mapped out for herself, but a family emergency shakes her to her core and proves that her safe and predictable path might be all wrong after all. Chris is there for her, and their chance meeting blossoms into something real. But the demands of fame soon catch up with him, and he struggles to balance his Hollywood lifestyle with the new life he and Bronte are building. There’s no way he can stay away from Los Angeles forever, but can their delicate new relationship withstand the rigors of his stardom?