Home
contemporary romance
Falling for Her by S.A. Clayton (ePUB) 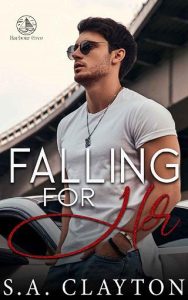 Hannah Baker knew leaving Harbour Cove was a mistake the second she reached the outer limits, but it was too late. She was moving in with her boyfriend, starting over and trying her best to get over the fact that the feelings she had for her best friend were anything but platonic.
Cash Harris was everything she wanted in a man; strong, loving, and fiercely loyal to those he loved, and that’s why it hurt so much that he just let her go without so much as a fight.
Five years is a long time and can completely change someone, and Hannah knows that first hand. Why else would she be leaving in the middle of the night while her boyfriend is out. He’s changed, and not for the better.
Hannah just hopes Cash hasn’t changed that much over the last few years because he’s her only hope at escape.